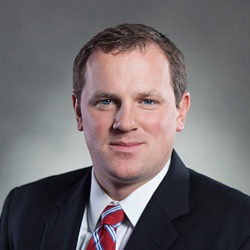 Matthew Vodzak is a partner in the firm’s Philadelphia office. He is admitted to practice in Pennsylvania and New Jersey. He specializes in complex legal matters, including insurance coverage and appeals with an emphasis on risk transfer. In addition to his appellate and insurance coverage experience, Mr. Vodzak also handles the defense of clients in catastrophic general liability matters and catastrophic injury cases.

As an undergraduate, Mr. Vodzak was a Schreyer Honors College University Scholar at the Pennsylvania State University (2007).  He was selected to Phi Beta Kappa, the nation’s most prestigious academic honor society. In law school, he was a member of the Woolsack Honor Society at the Pennsylvania State University, Dickinson School of Law (2010), Research Editor of the Penn State Law Review, and an academic tutor. Mr. Vodzak was a member of the Penn State Civil Rights Appellate Clinic. The Clinic represented litigants and amici curiae, and drafted briefs filed in the Supreme Court of the United States and the federal courts of appeals.