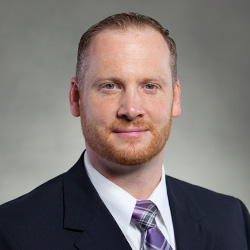 Justin Boehret obtained a defense verdict in a jury trial in Bucks County.  Mr. Boehret, who practices in FHMS’s Allentown office, represented a driver in a contested intersectional accident.  The jury found our client free of any negligence.

Our driver entered the intersection on a green light, but was unable to complete her left turn until the light turned red.  After confirming that the other vehicles had stopped at the light, the driver began her turn.  As she completed the turn, she was struck by plaintiff’s vehicle, coming from the opposite direction.  The plaintiff denied that he drove through a red light but admitted that he accelerated in order to proceed through the intersection.

The jury deliberated for less than an hour before returning a verdict for the defense.  The case was tried by Judge Robert Baldi of the Bucks County Court of Common Pleas.