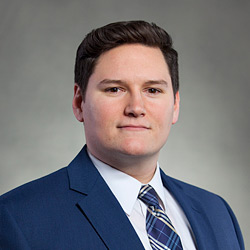 Randy Keiser in an associate in the firm’s Allentown office. He focuses his practice in the defense of casualty matters, including premises, construction, and commercial transportation cases. He represents a wide range of insurance companies and self-insureds.

Prior to joining FHMS, Mr. Keiser served as a law clerk for the Justice Correale Stevens of the Pennsylvania Supreme Court. There, among numerous other responsibilities, he drafted and researched precedent, statutes, rules and administrative codes in the preparation of Bench Memorandum to assist the Justice in preparing for oral argument. Mr. Keiser also reviewed and made recommendations on Petitions for Allowances of Appeal after review of existing case law, the Pennsylvania Rules of Appellate Procedure and related criteria.

Mr. Keiser is a 2012 graduate of Wilkes University and received his Juris Doctor from The Pennsylvania State University, The Dickinson College of Law, in 2015.