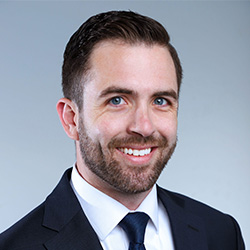 Evan R.C. Correia is an associate in the Philadelphia office of Fowler Hirtzel McNulty and Spaulding. He concentrates his practice on the defense of civil litigation matters involving commercial transportation, construction accidents, premises liability, and product liability. Mr. Correia has received his OSHA-10 certification in construction safety.

Prior to joining FHMS, Mr. Correia served as an Assistant District Attorney in Montgomery County, Pennsylvania from 2015 to 2021.  While there, he was a member of the Pretrial, Economic Crime, and Pottstown Community Prosecution units.  He also served as Captain of the High Intensity Drug Trafficking Area unit.  In this role, he primarily prosecuted doctors, drug delivery homicides, and high-level drug traffickers.  However, he has experience prosecuting all variety of crimes from murder to fraud.  He has tried twelve jury trials and dozens of bench trials to verdict.  In 2021, Mr. Correia was cross-sworn as a Special Assistant United States Attorney.

Since 2019, Mr. Correia has served on the Board of Directors for Family Services of Montgomery County.

Mr. Correia is admitted to practice in Pennsylvania.