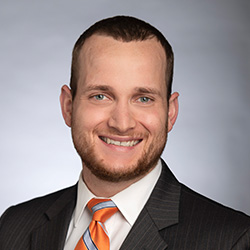 During 2022, Mr. Novak has obtained dismissal of clients from numerous matters, including the following:

Mr. Novak was named a 2022 Rising Star by the organization Super Lawyers®.

Mr. Novak is a U.S. Army veteran, with deployments to Afghanistan in 2012 and 2014. He served in the Finance Corps and was responsible for certifying the legality and propriety of disbursements exceeding four million dollars and collections exceeding eight million dollars. One of Mr. Novak’s favorite memories involves a mission to a CIA base on the Afghan – Pakistani border, where he met an operator named “Cockroach.” Mr. Novak also performed a tour of duty in Kuwait in 2011, where his unit supported the drawdown of U.S. forces from Iraq.

Mr. Novak lives in Lancaster with his wife and son. In his spare time, he enjoys serving in his church, the NFL, history podcasts, and board games.