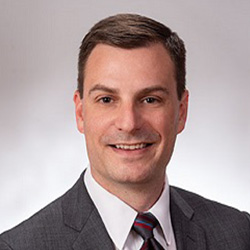 Benjamin J. Storms is an associate in the Allentown office of Fowler Hirtzel McNulty & Spaulding LLP. He focuses his practice on the defense of premises, commercial transportation and construction cases.

Prior to starting his legal career, Ben worked as a Legislative Assistant for various Members of Congress in the United States House of Representatives. While working in the House, Ben was responsible for drafting legislation and amendments to legislation as well as developing questioning for Committee hearings. He also worked in Washington D.C. as a Legislative Liaison at the Department of Homeland Security for the Transportation Security Administration handling various issues critical to our nation’s security.

Ben was a Judicial Extern for the Honorable Judge Henry S. Perkin, United States Magistrate Judge for the Eastern District of Pennsylvania where he worked on cases involving Employment Law, Civil Rights, Contract, and Constitutional Law. Prior to joining FHMS he then worked as an associate in a general law practice where he handled litigation cases and focused on estate planning, real estate, and landlord/tenant cases.

Mr. Storms is a graduate of Queens University of Charlotte, NC and he earned his J.D. at Widener University-Delaware Law School.